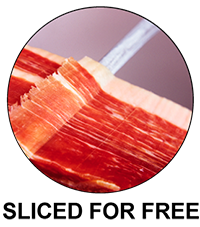 Reference: 123
€598.00 (tax incl.)
(27)
Joselito ham, made in Guijuelo: considered the best ham in the world. Joselito's pigs enjoy a habitat between cork oaks and holm oaks that favors both their diet and their physical form, which translates into a...
View more
Quick view
Love

At La Casa del Jamón we are specialized in Iberian ham. We have the best brands of Iberian hams in Spain. Thousands of satisfied customers and more than 30 years of experience in the world of high-quality ham support us. We select the best Iberian hams directly from the reference suppliers to take them to your home quickly and safely.

In our online store you have different qualities at your disposal when selecting your ham, from 100% acorn-fed Iberico ham with Denomination of Origin Jabugo (also called Summum) to Iberian cebo ham. You will have the option to select the weight you prefer among those available, and other options such as slicing and vacuum packaging of the piece, boneless or the cut started.

The preferred option to consume the Iberian ham is cutted by knife, into slices that should not be too long, about 4 to 10 centimeters, to put them in the mouth and taste them one by one. To do this, they must be cut very thin with a ham knife that, when used well, leaves the slices perfect for consumption. The preparation of the ham dishes, with them arranged one on top of the other so that they can be taken with the fingers one by one, requires extra time in addition to slicing the piece itself. All this, together with the knowledge of the anatomy of the ham and its parts, makes slicing a piece a complicated task that requires a lot of dedication and experience.

About the started cut: it is a service that we offer free of charge for several reasons, among them so that you can continue cutting your ham in the ideal way. The first cut of the ham is very important to cut the ham slices properly, with the perfect length and path; get the most out of the ham and thus make the most of the amount of sliced ​​ham that can be consumed.

The boning of a piece is carried out in the three main parts of a ham so that it can be inserted into a cutting machine and thus be able to slice it that way. We offer this boning service because we understand that for a restaurant or hostelry bussiness it may be essential to cut it this way, although we will always recommend consuming this food sliced ​​by hand, which is how it tastes best.

As of Royal Decree 4/2014, of January 10, both Iberian hams and Iberian shoulders must be identified with a seal that distinguishes them according to breed and diet:

What is the Denomination of Origin?

According to Regulation (CE) 1151/2012 of the European Parliament and of the Council, of November 21, 2012, on the quality regimes of agricultural and food products, DO in ham is defined as the name with which a product from from a certain area that provides a quality and characteristics that are typical of that environment to the Iberian ham.

In Spain there are currently 4 DOs for Iberian ham: Jabugo, from Extremadura, Guijuelo and Los Pedroches. Each one with its own characteristics granted by its geographical area.

How many ham is obtained after the ham cut?

It is common for many of our customers to have doubts regarding the performance/output of an Iberian ham, or the number of 100-gram or 200-gram packets that can be obtained after slicing a piece of this quality with a knife. Not all hams are the same: after slicing properly, it is estimated that 35-40% of the original weight is a good measure to get an idea of ​​the performance of an Iberico ham.

From a ham of about 7 kilograms, you can get from 25 to 28 envelopes of 100 grams of sliced ​​ham, including what they call "trimmings": that part of the ham that is a little tougher and cannot be sliced, so which is delivered in "remnants" for culinary use. The most common is that this part is cut into cubes that can be included in many dishes as an additional protein and, of course, flavor contribution.

You can choose between the Iberian cebo hams for a cheaper product that does not detract from its quality. The field-fed ham, although raised in the wild for most of its life, has been fed with feed, which makes it easier to rear and the product is cheaper. It takes less time to cure, which lowers its price a little more.

Even in the highest-end hams, 100% Iberian acorn-fed hams, we try to give a competitive price. We prepare personalized budgets for business gifts, and we publish offers of ham and gourmet products on our networks and on this website. We ship your ham to the entire Iberian Peninsula for free, and to the rest of Europe at a low price - check our shipping conditions.

Consume a healthy and handmade product

The nutritional properties of Iberian ham have been amply demonstrated. Protects against cardiovascular diseases, as it contains quality unsaturated fats with a high concentration of oleic acid. It provides more protein than most meats, hardly contains carbohydrates and is a source of B vitamins, as well as beneficial minerals such as zinc, magnesium, calcium... The star of our gastronomy, which also contributes to a balanced diet.