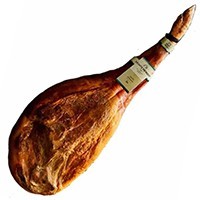 Serrano ham is obtained from white-bred pigs. To further differentiate it from any Iberian ham, remember that the white pig is not fed on acorns. The diet of these animals is based mainly on feed, and sometimes chestnuts.

There is a deep-rooted custom of curing the hams in high areas of the mountains, places with low temperatures where the curing is facilitated, thus this product is called "serrano". To distinguish it from York ham or cooked ham, any cured ham is named as Serrano, especially in some European countries; which can give rise to the typical confusion of Iberian ham with Serrano ham.

According to the designations in Article 21 of Royal Decree No 474/2014 of 13 June 1994 on quality standards for meat products, cured Serrano ham has three designations, which differ in terms of curing time:

This makes a key difference with the Iberian ham, as the latter needs to be cured for more than 20 months.

The serrano ham has a softer taste, characteristic that the lovers of the serrano ham appreciate; whereas the Iberian ham presents a more intense taste, with more aromas and shades, being the one of acorn the most distinguishable.

At La Casa del Jamón you can buy the best Serrano hams on the market, as we make an exhaustive selection from the different manufacturers to be able to offer the best to our clients.

You can order it as a whole piece or sliced and vacuum packed. In our sliced section you will find 100g portions cut by hand and vacuum-packed, ready to eat.